The Sierra Frontier Medical Resources Board of Directors is comprised of several longstanding residents who came together with the common goal of augmenting medical services in Western Sierra County. These volunteers bring clinical and emergency medical experience, legal expertise, as well as accounting, journalism, and fundraising skills to SFMR. Though from diverse backgrounds, the group shares a strong history of service to the community in a wide variety of roles.

Susan Hopkins
Director
SFMR board is comprised of compassionate members who are working to bring the best possible medical care to western Sierra County.  Susan is honored to serve with these fine community members and has been inspired by their service.  Susan is an early childhood educator with a focus on social justice and is also a proud wife, mother and grandmother. She has served on several non-profit boards with missions ranging from early education and training teachers to rural health care, to Sierra County history.

Shaun Felton-Price
Director
Shaun Felton-Price joined the SFMR Board of Directors in January, 2019.  He has an impressive background in firefighting and emergency medical care. Served as firefighter for CDF in San Luis Obispo County and has been active in the Pike and Downieville volunteer departments since 2008.  He is currently an Advanced Emergency Medical Technician and Firefighter for DVFPD. This former landscaper and skydiving instructor may have lofty goals, but he has his feet firmly planted in the community.  Also a member of the Downieville Lions Club

Tina Floyd
Director
Tina is a longtime Sierra County resident. She started as an EMT/Ambulance driver under the direction of Frank Lang and decided that she enjoyed helping others. Tina went back to school and became a nurse. Upon graduation she was offered a position at the Western Sierra Medical Clinic in Downieville and worked for 20 years. Now retired, Tina enjoys volunteering at Downieville School helping with drama productions. She is a member of the Downieville Boosters; Sierra County Arts Council and the Turnpike Players Theater group.

HONORED PAST DIRECTORS of SFMR 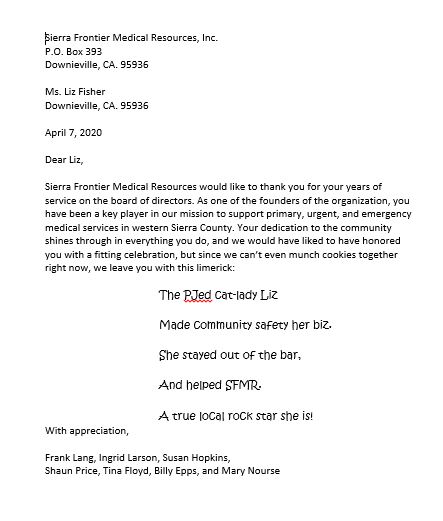 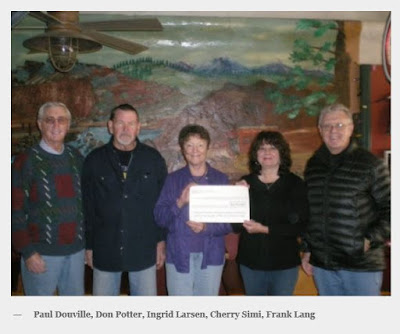 Don Potter of the Grubstake in Downieville presents a check for $650 to the newly formed Sierra Frontier Medical Resources, Inc (SFMR) for support of continued Urgent and the EMS in western Sierra County. The String A Longs band and vocalist performed at the fundraising event held in November at the Grubstake, MaryK and Don Potter donated all proceeds of the event to SFMR.